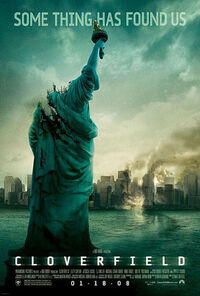 The Human Scale Parasites are minor antagonist in the 2008 American horror film Cloverfield.

These arthropod-like creatures hitch a ride up to the surface world on the back of Clover, only to leave their giant host and search for new terrestrial victims. Their bites contain a powerful venom that causes victims to swell up and explode.

Human Scale Parasites are dog-sized crustaceans with six spider-like like and 4 arms tipped with pincers. Their exoskeleton is a dirty white and their exposed jaw muscles are gray. They have multiple small black eyes.

The parasites are presumably killed after the city is bombed.

Add a photo to this gallery
Retrieved from "https://movie-monster.fandom.com/wiki/Human_Scale_Parasites?oldid=782"
Community content is available under CC-BY-SA unless otherwise noted.