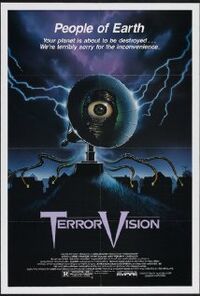 The Hungry Beast is the main antagonist of the 1986 American comedy-horror film TerrorVision.

When a bolt of lightning strikes their television antenna, Sherman Putterman and his grandfather must deal with a hostile alien beast after it is beamed into their house through their television.

The Hungry Beast is a large fleshy blob-like organism. Its head has two eyes, one larger and more cartoonish than the other, ear-like appendages, and a large wide mouth taking up most of its face. The Hungry Beast has two arms and a gelatinous body covered in thick red spikes that encircle its lower body. One of its arms has a third eye on the tip.

The Hungry Beast possesses the following powers and abilities:

The Hungry Beast survives the events of the film and succeeds in eating everyone.

Add a photo to this gallery
Retrieved from "https://movie-monster.fandom.com/wiki/Hungry_Beast?oldid=660"
Community content is available under CC-BY-SA unless otherwise noted.