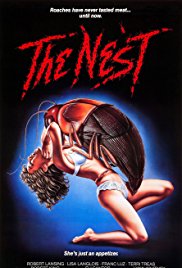 The INTEC Cockroaches are the main antagonists of the 1988 American horror film The Nest.

When the INTEC company genetically engineers a breed of cockroaches to consume and eliminate other pests, the insects go out of control and begin consuming (and transforming into) everything in their path.

The Catroach resembles a skinless cat with sparse patches of gray fur, pointed ears, tiny eyes, and insectoid mandibles. It also has numerous legs and antennae emerging from the tips of its ears.

The Manroach is an emaciated, skinless, almost-skeletal humanoid with a slimy surface, sparse patches of hair, and insectoid mandibles jutting out of its cheeks.

The Queen Roach is a hulking humanoid monster composed of numerous human-like corpses fused together into one body. Several of the faces have insectoid mandibles.

The INTEC Cockroaches possess the following powers and abilities:

Roach Motel
Add a photo to this gallery
Retrieved from "https://movie-monster.fandom.com/wiki/INTEC_Cockroaches?oldid=2568"
Community content is available under CC-BY-SA unless otherwise noted.