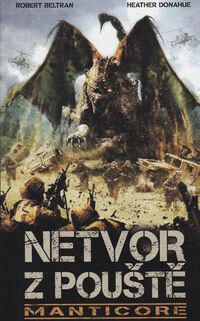 The Iraqi Manticore is the main antagonist of the 2005 American horror film Manticore.

An Iraqi insurgent leader awakens an ancient beast known as the Manticore, prompting it to go on a killing spree through Iraq, leaving a group of American soldiers to stop it.

The Iraqi Manticore is a vaguely feline creature with smooth hairless skin, a lion-like face, porcupine-like quills on its back, gigantic wings, and a long tail covered with more quills.

The Iraqi Manticore possesses the following powers and abilities:

The Manticore is smashed with a sledgehammer after it sees its own reflection, which causes it to freeze.

Add a photo to this gallery
Retrieved from "https://movie-monster.fandom.com/wiki/Iraqi_Manticore?oldid=2451"
Community content is available under CC-BY-SA unless otherwise noted.