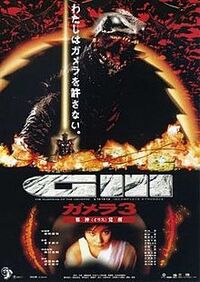 Iris, also known as Irys, is the main antagonist of the 1999 Japanese kaiju film Gamera 3: Revenge of Iris.

Iris is an ancient demon sealed away hundreds of years ago in a Japanese shrine. When a woman who blames Gamera for the death of her family forms a bond with the dormant creature, it awakens and slowly grows to monstrous sizes.

Iris is a tall bipedal creature resembling an upright theropod dinosaur with hooved legs. Its retractable arms resemble swords, and its silver head resembles a pointed seashell with glowing eyes. Iris appears to have exposed muscle tissue covering its body, only some of it being covered by armored plates. Iris has large fins or wings emerging from its shoulders, and numerous red tentacles tipped with silver spikes trail behind it.

Gamera uses Iris's own plasma attacks to slice him in half, causing Iris to burst into flames and explode. 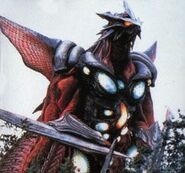 Add a photo to this gallery
Retrieved from "https://movie-monster.fandom.com/wiki/Iris?oldid=1756"
Community content is available under CC-BY-SA unless otherwise noted.