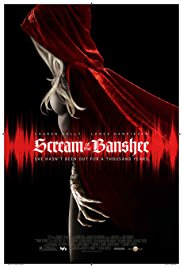 The Irish Banshee is the main antagonist of the 2011 American horror film Scream of the Banshee.

Ages ago, the Banshee was decapitated by an English knight. In the present day, her severed head is unearthed by an archaeology professor, allowing her to resume her reign of terror.

The Banshee is killed after it is stabbed with a sacred spear and then decapitated, with its head being shut back in the box it was found in.

Add a photo to this gallery
Retrieved from "https://movie-monster.fandom.com/wiki/Irish_Banshee?oldid=2246"
Community content is available under CC-BY-SA unless otherwise noted.