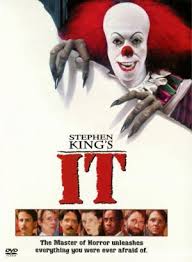 It, usually known as Pennywise the Dancing Clown, is the main antagonist of the 1990 American horror film It and its 2017 remake.

An eons-old shapeshifting eldritch monster, "It" as it is referred to (as no one knows its true name or form) is a fear-eating creature that emerges every 27 years to consume the children of the town of Derry, Maine.

It generally takes the form of a clown with colorful clothing, but its true form is a non-physical phenomenon known as "the deadlights".

It possesses the following powers and abilities:

In the 1990 film, It is killed after the protagonists knock it over and rip out its heart. In the 2017 film, it is only temporarily defeated. In the 2019 sequel, it dies when the Losers remove its heart and crush it.

2017
Add a photo to this gallery
Retrieved from "https://movie-monster.fandom.com/wiki/It?oldid=3003"
Community content is available under CC-BY-SA unless otherwise noted.