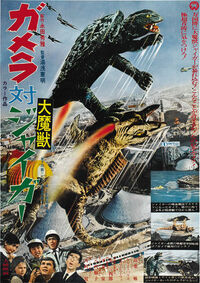 Jiger is the main antagonist of the 1970 Japanese kaiju film Gamera vs. Jiger.

When a sacred statue is removed from the lost continent of Mu, a demonic creature that once roamed the island awakens and attempts to retrieve it.

Jiger is a brown quadrupedal creature with a large head. She has a large horn on her head, two horns in front of her eyes, and two tusks protruding from her upper jaws. There is a large red fin on her back.

Gamera throws the sacred statue at Jiger, lodging it in her head and killing her.

Add a photo to this gallery
Retrieved from "https://movie-monster.fandom.com/wiki/Jiger?oldid=1750"
Community content is available under CC-BY-SA unless otherwise noted.