Movie Monster Wiki
Register
Don't have an account?
Sign In
Advertisement
in: 2015 monsters, Abnormal humans, Children and babies,
and 4 more 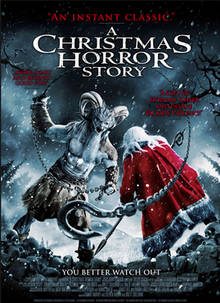 The Jingles Changeling is the antagonist in the second segment of the 2015 Christmas horror anthology, A Christmas Horror Story.

The Jingles Changeling's appearance is a small pale lime green skinned creature with thin silvery strands of hair, one eye socket with a sicky green eyeball surrounded by a blood red iris the other swollen shut with bloated dark purple eyelids, green scabby claws with a moss-like texture, a sunken in mouth with purplish black lips and sugar pink nose like that of a mole.

The Jingles Changeling possesses the following powers and abilities:

Jingles as a Changeling Mimic