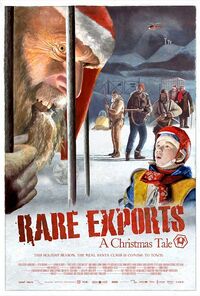 Joulupukki, also known as Santa Claus or The Yule Goat, is the main antagonist of the 2010 Finnish comedy-horror film Rare Exports: A Christmas Tale.

Lured onto a frozen lake and trapped in ice hundreds of years ago, the Joulupukki has been waiting for centuries for its followers to thaw it out so that it may continue its reign of terror.

Not much of Joulupukki's body is seen, but it appears to be an enormous satyr-like being with segmented ram horns. Throughout the film, it is trapped in ice.

Before Joulupukki's followers can thaw it out, it is destroyed with dynamite.

Add a photo to this gallery
Retrieved from "https://movie-monster.fandom.com/wiki/Joulupukki?oldid=1326"
Community content is available under CC-BY-SA unless otherwise noted.