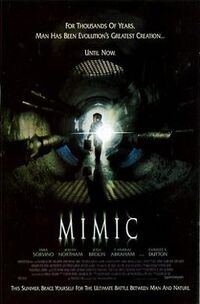 The Judas Breed are the main antagonists of the 1997 American horror film Mimic.

The Judas Breed are a species of man-sized, cockroach-like insects that walk on four of their legs and use the two foremost limbs as weapons and grasps. They possess large insectoid wings that they can drape over their bodies to create the illusion of clothing.

Most of the insects are killed by blowing them up with a broken gas line, and the final creature is killed by luring it in front of an oncoming subway train. However, they were revealed to have survived as evidenced by Mimic 2 and 3. 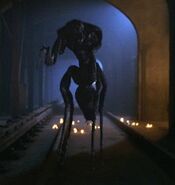 Add a photo to this gallery
Retrieved from "https://movie-monster.fandom.com/wiki/Judas_Breed?oldid=2452"
Community content is available under CC-BY-SA unless otherwise noted.