Jumbo the Klown is a supporting antagonist in the 1988 American comedy-horror film Killer Klowns from Outer Space.

The first Klown to be seen in the film, Jumbo is a sadistic murderer even for his own species's standards, targeting everyone from Officer Mooney to a little girl at a fast food restaurant.

Jumbo is a large Klown with a bit of green hair on the sides of his head and a green curl on top. His costume consists of a blue and purple bodysuit and a purple frill around his neck.

Jumbo the Klown possesses the following powers and abilities:

Jumbo is killed after Dave shoots him in the nose. 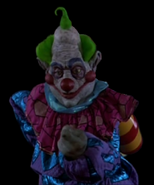 Add a photo to this gallery
Retrieved from "https://movie-monster.fandom.com/wiki/Jumbo_the_Klown?oldid=1936"
Community content is available under CC-BY-SA unless otherwise noted.