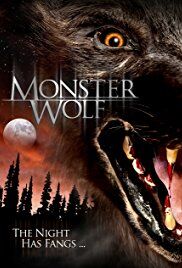 The Kachinawea is the main antagonist of the 2010 American horror film Monsterwolf.

An oil company searching for a new drilling site on Native American land accidentally resurrects an ancient wolf spirit dedicated to protecting the land, prompting it to go on a savage rampage.

The Kachinawea is a large canine-like creature covered in shaggy brown hair. The only bare parts of its body are its paws and face, which are covered in reddish-brown skin. The Kachinawea has large protruding canine teeth and a hunched back.

The Kachinawea possesses the following powers and abilities:

The Kachinawea is banished from our world when it is shot with a shotgun using a Native American necklace as ammunition. 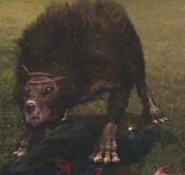 Add a photo to this gallery
Retrieved from "https://movie-monster.fandom.com/wiki/Kachinawea?oldid=1157"
Community content is available under CC-BY-SA unless otherwise noted.