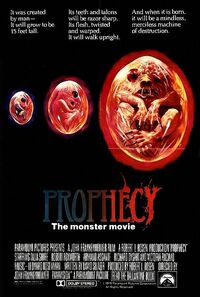 Mutagens used as a fungicide in a Maine forest have resulted in the birth of a horrifically deformed grizzly bear named Katahdin (after a local legendary forest spirit), who goes on a rampage upon reaching adulthood.

Katahdin is an abnormally large bipedal grizzly bear that was born with a horrific birth defect that left the skin on the left side of her body horribly scarred and disfigured. Katahdin is 10.5 feet tall, beeing in fact bigger than a normal grizzly bear, which can reach 9.1 feet.

The Katahdin possesses the following powers and abilities:

Verne kills Katahdin by stabbing her to death and then drowns her in a lake. However, Katahdin's mate is seen at the end of the film, having survived its events.

Add a photo to this gallery
Retrieved from "https://movie-monster.fandom.com/wiki/Katahdin?oldid=3784"
Community content is available under CC-BY-SA unless otherwise noted.