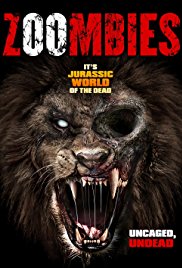 Kifo is arguably the main antagonist of the 2016 American horror film Zoombies.

When a strange virus causes animals in the Eden Wildlife Zoo to become overly aggressive, one of the casualties is Kifo, the zoo's famous Cross River gorilla.

Kifo is a large black gorilla with graying fur on his face.

Kifo is seemingly shot to death by Ellen, but the end of the film shows that he survived.

Add a photo to this gallery
Retrieved from "https://movie-monster.fandom.com/wiki/Kifo?oldid=2180"
Community content is available under CC-BY-SA unless otherwise noted.