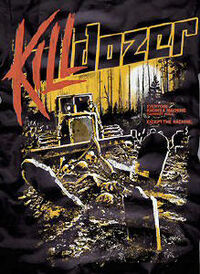 The Killdozer is the main antagonist of the 1974 American horror film Killdozer.

After a meteorite crashes on an island off the coast of Africa, the ghost of the alien inside possesses the bulldozer of the construction crew building an airstrip there and goes on a killing rampage.

The Killdozer possesses the following powers and abilities:

The Killdozer is destroyed after it is lured into a trap and electrocuted, causing the alien ghost to fade away into nothing.

Add a photo to this gallery
Retrieved from "https://movie-monster.fandom.com/wiki/Killdozer?oldid=919"
Community content is available under CC-BY-SA unless otherwise noted.