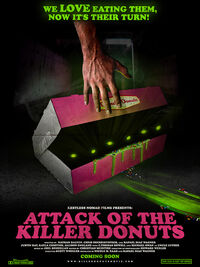 When an experimental chemical is accidentally dumped into a donut fryer, the donuts produced from the fryer develop both sentience and an appetite for human flesh.

The Killer Donuts resemble normal donuts of various kinds. However, they have numerous sharp teeth.

The Killer Donuts possesses the following powers and abilities:

The Killer Donuts are finally defeated after being blown up along with the Dandy Donuts and almost everyone in it. However, one Killer Donut is shown alive at the very end of the movie. 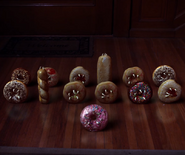 Add a photo to this gallery
Retrieved from "https://movie-monster.fandom.com/wiki/Killer_Donuts?oldid=2839"
Community content is available under CC-BY-SA unless otherwise noted.