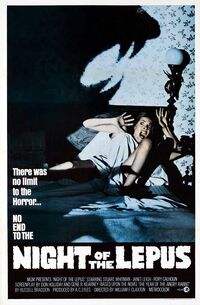 The Killer Lepus are the main antagonists of the 1972 American horror film Night of the Lepus.

The Killer Lepus are giant rabbits accidentally brought about during an experiment to control their breeding patterns and lower their population.

The Killer Lepus possess the following powers and abilities:

The giant rabbits are killed when they are lured onto a stretch of electrified railroad track.

Add a photo to this gallery
Retrieved from "https://movie-monster.fandom.com/wiki/Killer_Lepus?oldid=784"
Community content is available under CC-BY-SA unless otherwise noted.