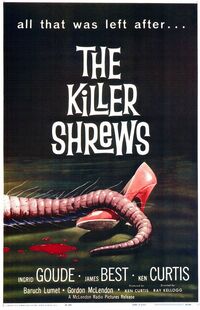 In an attempt to reduce the size of humans in order to reduce their food intake, Dr. Marlowe Cragis accidentally creates a population of gigantic man-eating shrews that continuously grow in size.

The Killer Shrews possesses the following powers and abilities:

Most of the Killer Shrews survive to the end of the film and are left to their own devices on the island.

Add a photo to this gallery
Retrieved from "https://movie-monster.fandom.com/wiki/Killer_Shrews?oldid=1189"
Community content is available under CC-BY-SA unless otherwise noted.