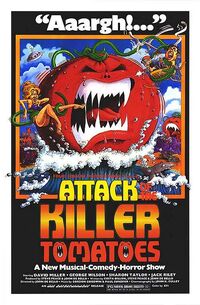 The Killer Tomatoes are genetically altered fruits created by the mad scientist Professor Mortimer Gangreen in an attempt to take over the world.

The Killer Tomatoes resemble normal tomatoes, but they have human-level intelligence and the ability to move and roll of their own accord. In the sequels, they gain facial features like mouths and eyes.

The Killer Tomatoes possesses the following powers and abilities:

The Killer Tomatoes are paralyzed in fear by the terrible song "Puberty Love", allowing the surviving townspeople to squash them all.

Add a photo to this gallery
Retrieved from "https://movie-monster.fandom.com/wiki/Killer_Tomatoes?oldid=925"
Community content is available under CC-BY-SA unless otherwise noted.