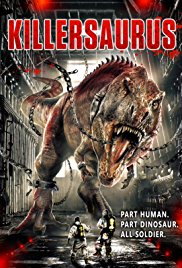 Killersaurus is the main antagonist of the 2015 British horror film Killersaurus.

A scientist specializing in 3-D printing biological tissues but low on funding is approached by a shadowy organization prepared to fund his research in exchange for a living Tyrannosaurus rex to use as a bioweapon.

Killersaurus is a large light-brown Tyrannosaurus rex with sharp spines running down its back.

The film simply ends, with the creature's fate left unsure. It seemingly survives.

Add a photo to this gallery
Retrieved from "https://movie-monster.fandom.com/wiki/Killersaurus?oldid=1384"
Community content is available under CC-BY-SA unless otherwise noted.