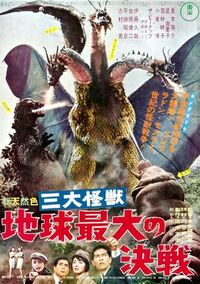 King Ghidorah is the main antagonist of the 1964 Japanese kaiju film Ghidorah, the Three-Headed Monster and several sequels.

When a meteorite crash-lands on Earth, it releases a malicious three-headed dragon that had devastated the planet Venus, which proceeds to attack Japan.

King Ghidorah is an enormous bipedal alien dragon with golden scales and three heads. Each head has a crocodilian snout, curved horns, and a row of spikes going down its neck. Instead of arms, it has two large brown wings. It also has two thick legs and two tails, each ending in a mass of spines.

King Ghidorah was eventually beaten enough that it fled back into space. 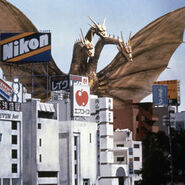 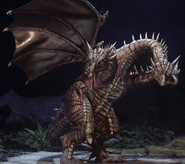 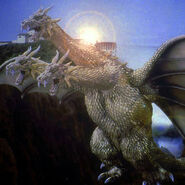 Anime
Add a photo to this gallery
Retrieved from "https://movie-monster.fandom.com/wiki/King_Ghidorah?oldid=4150"
Community content is available under CC-BY-SA unless otherwise noted.