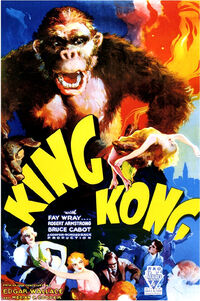 King Kong is the main anti-hero of the 1933 American adventure monster film King Kong and its various remakes and reimaginings.

When a film crew led by director Carl Denham travels to an uncharted island in hostile waters to film an ambitious movie, they are greeted by a tribe of natives that worships the monsters as a deity. When the monster appears, the crew captures it and brings it to New York City.

King Kong is killed after he is sufficiently weakened by airplane fire and falls to his death from atop the Empire State Building.

2017
Add a photo to this gallery
Retrieved from "https://movie-monster.fandom.com/wiki/King_Kong?oldid=2760"
Community content is available under CC-BY-SA unless otherwise noted.