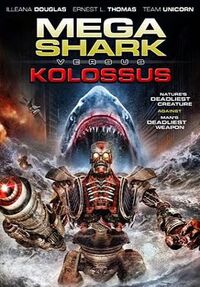 Kolossus is the main antagonist of the 2015 American action-horror film Mega Shark Versus Kolossus.

Kolossus was a gigantic robot constructed by the USSR in the 1950s to fight America should their weapons ever grow too powerful in the midst of the Cold War. Kolossus was awoken in 2015 by Russian miners searching for red mercury.

Kolossus is a humanoid robot with a somewhat skeletal appearance. It closely resembles a human skeleton with red muscle tissue on its torso and head. Its arms and legs are much "blockier" in shape than its more organic torso and head, resembling stone blocks. Kolossus also has glowing yellow eyes.

The Kolossus possesses the following powers and abilities:

Kolossus is blown up, along with Mega Shark, when the former self-detonates its remaining supplies of red mercury.

Add a photo to this gallery
Retrieved from "https://movie-monster.fandom.com/wiki/Kolossus?oldid=1912"
Community content is available under CC-BY-SA unless otherwise noted.