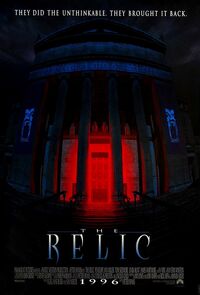 The Kothoga is the main antagonist of the 1997 American horror film The Relic.

After drinking a soup made by South American tribesmen, anthropologist Dr. John Whitney is transformed into a nightmarish chimeric beast called the Kothoga.

The Kothoga is a chimeric creature combining aspects of fish, reptiles, primates, and insects. Its body is quadrupedal with a sloping back. Its backside is covered in muddy green crocodilian scales and its underbelly has scales that are a pale flesh tone. A row of spines runs down its back, as well as a dark brown main on the back of its head and another mane at the base of its thin but muscular tail. The Kothoga's head has two very small glowing white eyes, exposed gums, anglerfish-like teeth, and two pairs of tusks/mandibles (a large one and a smaller one below the larger one).

The Kothoga possesses the following powers and abilities:

The Kothoga is killed after it is burned alive in an explosion.

Add a photo to this gallery
Retrieved from "https://movie-monster.fandom.com/wiki/Kothoga?oldid=961"
Community content is available under CC-BY-SA unless otherwise noted.