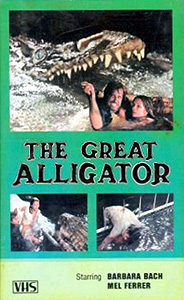 Kruna is the main antagonist of the 1979 Italian horror film The Great Alligator River.

When a white photographer and his fellow tourists accidentally anger the god of a tribe of island natives, it manifests as an enormous crocodile and goes on a rampage.

Kruna is an abnormally large crocodile measuring between 25 and 30 feet in length.

Kruna is killed after it is blown up.

Add a photo to this gallery
Retrieved from "https://movie-monster.fandom.com/wiki/Kruna?oldid=1088"
Community content is available under CC-BY-SA unless otherwise noted.