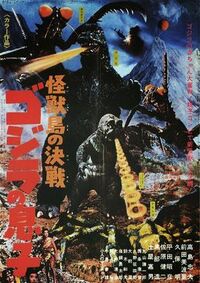 Kumonga is arguably the main antagonist of the 1967 Japanese kaiju film Son of Godzilla.

After Godzilla's son Minilla accidentally kicks a rock into the valley in which he dwells, Kumonga awakens from his dormancy and goes on a rampage.

Kumonga is an enormous hairy black spider with thin limbs, yellow stripes on his legs and abdomen, and shiny purple eyes.

Kumonga was eventually set on fire by the combined power of Godzilla and Minilla's atomic breaths. 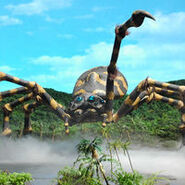 2004
Add a photo to this gallery
Retrieved from "https://movie-monster.fandom.com/wiki/Kumonga?oldid=1584"
Community content is available under CC-BY-SA unless otherwise noted.