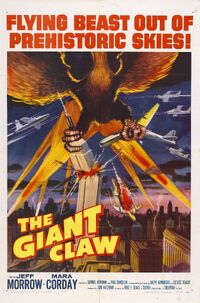 La Carcagne, also known as the Antimatter Space Buzzard, is the main antagonist of the 1957 American horror film The Giant Claw.

La Carcagne is a gigantic bird-like creature originating from an alternate dimension made entirely of antimatter.

La Carcagne resembles a battleship-sized buzzard or vulture. Its neck and legs are devoid of feathers, and its neck appears to be slightly segmented like an accordion spring. The creature's beak curves downward and it filled with numerous rounded teeth. Its eyes are large and have a crazy look to them, and there are numerous giant feathers sticking out of the creature's head.

La Carcagne is killed when a special isotope is fired at it to destroy its force field, allowing it to be taken down by missiles.