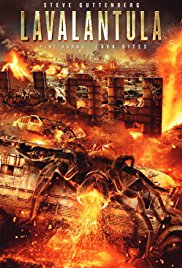 The Lavalantulas are the main antagonists of the 2015 American horror film Lavalantula and its 2016 sequel, 2 Lava 2 Lantula.

A series of volcanic eruptions near Los Angeles opened cracks in the ground, allowing a species of subterranean, fire-breathing spiders to emerge and cause havoc.

Lavalantulas are large tarantulas of varying sizes. They possess black exoskeletons with sporadic orange highlights, giving off a charred look. They have red eyes and spikes covering their abdomens and legs.

The Lavalantulas possess the following powers and abilities:

The Lavalantulas die after the queen is killed with a liquid nitrogen bomb, their shared hive mind killing all of the soldier spiders immediately afterward in her absence.

Add a photo to this gallery
Retrieved from "https://movie-monster.fandom.com/wiki/Lavalantulas?oldid=1442"
Community content is available under CC-BY-SA unless otherwise noted.