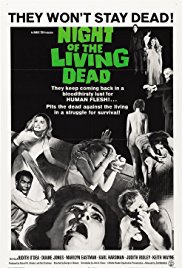 The Living Dead, also known as Ghouls or Zombies, are the main antagonists of the 1968 American horror film Night of the Living Dead and its remakes, sequels, and spin-offs.

A space probe blown up in the Earth's atmosphere sends radiation down from space, causing human corpses to reanimate as flesh-eating creatures.

The Living Dead are human corpses of various sizes, shapes, and skin colors that shamble about with stunted movements.

The Living Dead possess the following powers and abilities:

The main group of creatures is killed by gunfire.

Add a photo to this gallery
Retrieved from "https://movie-monster.fandom.com/wiki/Living_Dead?oldid=2127"
Community content is available under CC-BY-SA unless otherwise noted.