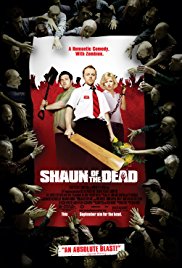 The London Zombies are the main antagonists of the 2004 American comedy-horror film Shaun of the Dead.

A strange virus causes people throughout London to transform into mindless, flesh-eating monsters with no self-preservation instincts.

The London Zombies are human corpses of various sizes, shapes, and skin colors that shamble about with stunted movements.

The London Zombies possess the following powers and abilities:

Most of the zombies are killed by the British Army. The remainders are used for cheap forced labor and for entertainment.

Add a photo to this gallery
Retrieved from "https://movie-monster.fandom.com/wiki/London_Zombies?oldid=2129"
Community content is available under CC-BY-SA unless otherwise noted.