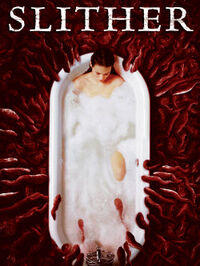 The Long One is the main antagonist of the 2006 American comedy-horror film Slither.

A meteorite containing a parasitic alien lifeform crash-lands outside the South Carolina town of Wheelsy, prompting the creature to take control of local car dealer Grant Grant and turn the entire town into an army of zombies.

The Long One's appearance is best explained through its life cycle.

The first stage is the Needle stage, which takes the form of a gelatinous white sac containing a series of small darts. When Grant approaches the sac, it fires a dart at him, transforming him into the Host.

The Host is the primary vessel for The Long One's consciousness. Regardless of its prior species, the Host organism is transformed into a fleshy, tentacled mass composed of various body parts and organs. During the transforming into the Host's final form, The Long One impregnates an organism of its choosing, transforming that organism into the Womb.

The Womb is an organism chosen to gestate the thousands of infant slugs needed to take over the planet. The Womb organism gains an unsatisfiable hunger for raw meat, slowly growing fatter and fatter until they are an immobile blob filled to the brim with developing slugs. When gestation is complete, the Womb explodes, releasing the slugs into the environment.

The Slugs are just that; blackish-red leech-like organisms that crawl down the throats of their victims and take over their bodies, turning them into obedient zombie slaves that donate their biomass to the Host's ever-growing body.

The Long One possesses the following powers and abilities:

The Long One is ultimately killed after Grant (in his Host form) is filled with propane and blown up. However, a cat is ultimately infected when it feasts on Grant's remains, likely restarting the process.

Slugs
Add a photo to this gallery
Retrieved from "https://movie-monster.fandom.com/wiki/Long_One?oldid=3862"
Community content is available under CC-BY-SA unless otherwise noted.