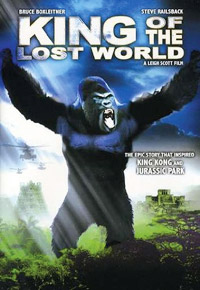 The Lost World King is the main antagonist of the 2005 American kaiju film King of the Lost World.

When a plane crashed in a remote jungle, the surviving passengers must deal with a hostile tribe of natives, as well as a gigantic gorilla.

The Lost World King possesses the following powers and abilities:

The ape is killed after a nuclear bomb is detonated on the island.

Add a photo to this gallery
Retrieved from "https://movie-monster.fandom.com/wiki/Lost_World_King?oldid=1994"
Community content is available under CC-BY-SA unless otherwise noted.