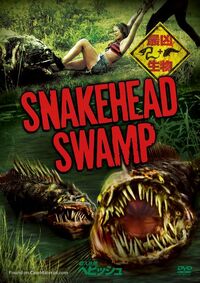 The Louisiana Snakeheads are the main antagonists of the 2014 American horror film Snakehead Swamp.

A truck carrying genetically engineered snakeheads crashes in the Louisiana bayou, releasing the bloodthirsty fish into the local swamp.

The Louisiana Snakeheads are large predatory fish with humped backs, dark green backs, and light underbellies. Their skin is wrinkled and they have large dorsal fins on their heads. Their fish are reddish and their large eyes are yellow. They have numerous needle-like teeth.

The Louisiana Snakeheads possess the following powers and abilities:

The last snakehead is shot several times and then set on fire with a flare gun.

Add a photo to this gallery
Retrieved from "https://movie-monster.fandom.com/wiki/Louisiana_Snakeheads?oldid=1973"
Community content is available under CC-BY-SA unless otherwise noted.