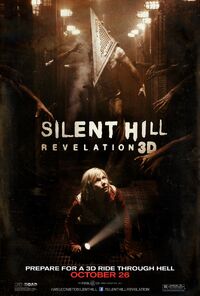 The Mannequin Monster is a minor antagonist in the 2012 American horror film Silent Hill: Revelation.

While fleeing from the Otherworld, Heather Mason unwittingly stumbles into the lair of this spider-like creature, which attempts to turn her into a mannequin and assimilate her into its body.

The Mannequin Monster is a large vaguely spider-like creature made up of numerous black and white mannequin parts, including a multitude of different heads and hands where feet should be. Its joints seem to be made of red human muscle tissue.

The Mannequin Monster possesses the following powers and abilities:

The Mannequin Monster seemingly survives the event of the film, being last seen in the ending credits assaulting some Dark Nurses.

Add a photo to this gallery
Retrieved from "https://movie-monster.fandom.com/wiki/Mannequin_Monster?oldid=1193"
Community content is available under CC-BY-SA unless otherwise noted.