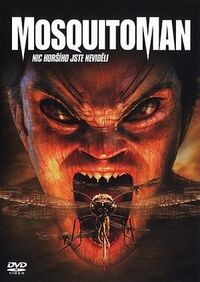 Mansquito, formerly known as Ray Erikson, is the main antagonist of the 2005 American horror film Mansquito.

Convict Ray Erikson was the test subject for Dr. Jennifer Allen's cure for the Gillen virus, but an explosion caused him to be showered with experimental chemicals and genetically altered mosquitos that were infected with the virus.

The Mansquito is a large anthropomorphic mosquito with wings, a long proboscis, and a gray exoskeleton with black highlights.

Dr. Allen, after having transformed into a mosquito creature herself due to also being splashed with the chemical and mosquitos, kills the Mansquito by electrocuting him.

Add a photo to this gallery
Retrieved from "https://movie-monster.fandom.com/wiki/Mansquito?oldid=2143"
Community content is available under CC-BY-SA unless otherwise noted.