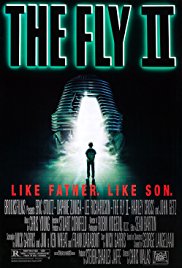 Martinfly, also known as Martin Brundle, is the main protagonist of the 1989 American horror film The Fly II.

The son of the late scientist Seth "Brundlefly" Brundle, Martin was born with his father's fly genes, causing him to advance through his adolescence at an increased rate.

Martinfly is a much more natural-looking hybrid due to being born with the fly genes. He is a tall humanoid creature with tattered black and brown skin. Standing on two clawed legs, Martinfly has four insectoid arms that each end in two clawed fingers. Martinfly's head possesses two large amber eyes that are both vertebrate-like and insect-like, and his lower jaw consists of two toothed mandibles.

Martinfly forces Bartok Industries CEO Anton Bartok into the telepod with him in an effort to swap his fly genes with Bartok's human genes. The swap is successful, leaving Martin as a full human and Bartok as a freakish maggot-like mutant.