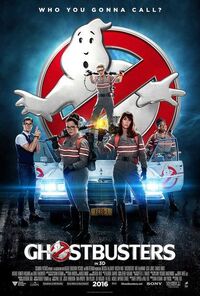 Mayhem is a minor antagonist in the 2016 American comedy-horror film Ghostbusters.

Mayhem was a large dragon-like ghost haunting the Stonebrook Theatre, where he was possessing mannequins and disrupting rock concerts.

Mayhem is a large, green, dragon-like ghost. He has a long snout, sharp teeth, four horns, and glowing orange eyes with reptilian pupils. He has a pair of large bat-like wings and crazy green hair on his head.

Mayhem is captured at the Stonebrook Theatre, but he is accidentally released. He is later seen during the battle in Times Square, where Patty destroys him with the Ghost Chipper.

Add a photo to this gallery
Retrieved from "https://movie-monster.fandom.com/wiki/Mayhem?oldid=2080"
Community content is available under CC-BY-SA unless otherwise noted.