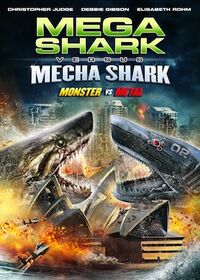 Mecha Shark is the main protagonist and later antagonist of the 2014 American action-horror film Mega Shark Versus Mecha Shark.

The Mecha Shark is a shark-shaped submarine made of dark gray metal with light gray highlights. It has numerous glowing red eyes/portholes and it has "O2" written in large letters behind its eyes.

The Mecha Shark possesses the following powers and abilities:

Mecha Shark is blown up, along with Mega Shark, when the latter accidentally bites into a torpedo at close range, destroying them both.

Add a photo to this gallery
Retrieved from "https://movie-monster.fandom.com/wiki/Mecha_Shark?oldid=743"
Community content is available under CC-BY-SA unless otherwise noted.