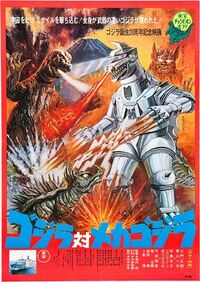 Mechagodzilla is the main antagonist of the 1974 Japanese kaiju film Godzilla vs. Mechagodzilla and several sequels.

The first Mechagodzilla was a creation of an alien race that attempted to invade Earth. The second and third Mechagodzillas were human creations.

Mechagodzilla is a large robotic theropod dinosaur with an upright posture. It has large yellow eyes, a row of spines down its back, a tail that abruptly ends rather than tapers to a point, and large red discs on its cheeks.

Godzilla eventually defeated his robotic replica after tearing its head off.

2002
Add a photo to this gallery
Retrieved from "https://movie-monster.fandom.com/wiki/Mechagodzilla?oldid=1624"
Community content is available under CC-BY-SA unless otherwise noted.