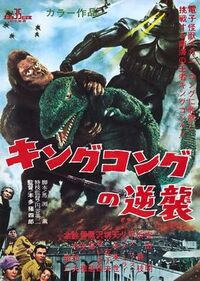 Mechani-kong is a major antagonist in the 1967 Japanese kaiju film King Kong Escapes.

Created by international criminal Dr. Who, Mechani-kong was invented to mine for Element X from the Arctic underground.

Mechani-kong is a large silvery robotic version of King Kong with visible bolts on its limbs, a utility belt of grenades around its waist, and a hypnotic light atop its head.

Mechani-kong is destroyed after it short-circuits atop the Tokyo Tower, causing it to fall and shatter on impact. 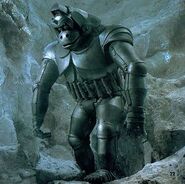 Add a photo to this gallery
Retrieved from "https://movie-monster.fandom.com/wiki/Mechani-kong?oldid=2057"
Community content is available under CC-BY-SA unless otherwise noted.