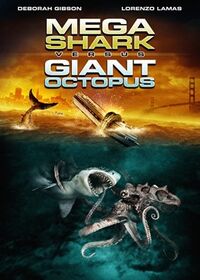 Mega Shark is one of the main antagonists of the 2009 American-British action-horror film Mega Shark Versus Giant Octopus.

After experimental military sonar transmitters cause a pod of whales to break open a glacier, they accidentally release a preserved Megalodon into the ocean, where it battles a gigantic octopus.

The Mega Shark is a large great white-like shark measuring at least 70 feet in length while there's another way one bigger than the size when attacking the Golden Gate Bridge.

The Mega Shark possesses the following powers and abilities:

The Mega Shark is strangled to death by the Giant Octopus. However, its sequel Mega Shark Versus Crocosaurus showed that it survived. However, in the ensuing fight with Crocosaurus, it was caught in a volcanic eruption, killing it. A second shark dubbed the Mega Shark breaks from a glacier, but is also killed - though not before reproducing asexually. The third Mega Shark was killed in its fight with Kolossus.