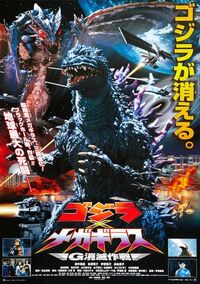 Megaguirus is the main antagonist the 2000 Japanese kaiju film Godzilla vs. Megaguirus.

Megaguirus was the queen of a colony of prehistoric dragonflies transported to modern day by a time portal, but when her colony provided her with enough of Godzilla's stolen energy, she transformed into a colossal flying monster.

Megaguirus is a large gray dragonfly-like creature with yellowish-orange highlights on its head spikes, forelimbs, and wings. It has a reptilian jaw with numerous fangs situated outside of its mouth and large red eyes. It has two pairs of limbs, one ending in mantis-like pincers and the other held at her sides. Her tail ends in a large claw through which she absorbs energy.

Add a photo to this gallery
Retrieved from "https://movie-monster.fandom.com/wiki/Megaguirus?oldid=1627"
Community content is available under CC-BY-SA unless otherwise noted.