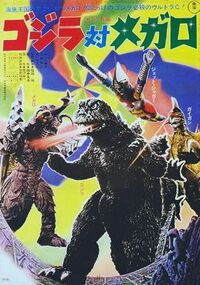 Megalon is the main antagonist the 1973 Japanese kaiju film Godzilla vs. Megalon.

Megalon is the guardian of the underground kingdom of Seatopia, where it is worshiped as a god and helps them to gain revenge on humans for pollution.

Megalon resembles a cross between a cockroach and a beetle. It has a brown body with a thick hide and orange highlights near its armpits. Its wing covers are a mottled orange and brown. Its arms end in large drill-like appendages and its legs end in clawed, two-toed feet. It has no neck separating its head and body, but they are separated by a furry collar of sorts. Its eyes are large and yellow and its mouth is composed of two large segmented mandibles resembling small metal bars. On its head are two antennae and a large stag beetle-like horn.

Megalon was eventually beaten badly enough that it was forced to flee back underground. 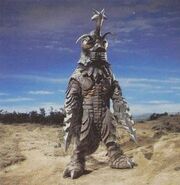 Add a photo to this gallery
Retrieved from "https://movie-monster.fandom.com/wiki/Megalon?oldid=1630"
Community content is available under CC-BY-SA unless otherwise noted.