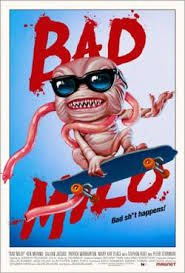 Milo is the main antagonist of the 2013 American comedy-horror film Bad Milo!.

When Duncan goes to a gastroenterologist to ask about his recent gastric stress, he discovers a small creature growing inside his colon that emerges each night to kill those whom Duncan sees as a cause of stress.