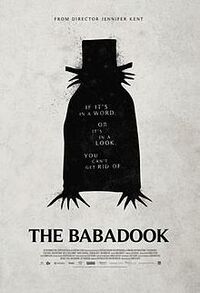 Possession
Telekinesis
Shape-shifting
Teleportation
Mister Babadook, also known as The Babadook, is the main antagonist of the 2014 Australian horror thriller film The Babadook.

The entity is first brought into distraught single mother Amelia's home after she finds a children's pop-up book featuring it. After reading it, she begins to feel as though the entity is stalking her and her son Samuel.

Mister Babadook generally takes on the appearance of a tall emaciated man with a white face, sunken-in eyes with small pupils, and a manic grin surrounded by black mouth paint. It wears a long coat and a top hat, and its long spindly fingers are armed with knife-like claws.

At the film's climax, Mister Babadook reveals its true form: a room-sized black shadow with two large jagged wings emerging from it.

At the film's end, Mister Babadook is reduced to nothing more than an invisible force to be sated by worms fed to it by Amelia.

Mister Babadook is reduced to a weak and invisible force that is kept in Amelia's basement and regularly fed worms to keep it at bay.

Add a photo to this gallery
Retrieved from "https://movie-monster.fandom.com/wiki/Mister_Babadook?oldid=4038"
Community content is available under CC-BY-SA unless otherwise noted.