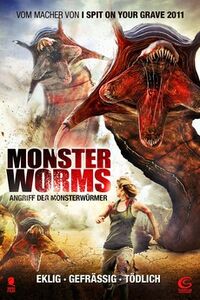 When an American team ventures to the Gobi Desert in Mongolia to drill for oil, they are attacked by a nest of large subterranean monsters with the ability to disrupt electronics.

Mongolian Death Worms are large worm-like organisms with striped black backs and light cream underbellies. They have four mandibles around their mouths and said mouths are like those of lampreys.

One of the worms is blown up with a gasoline tank, several are killed by Officer Timur, and the queen worm is killed after several generators are overloaded and explode.

Add a photo to this gallery
Retrieved from "https://movie-monster.fandom.com/wiki/Mongolian_Death_Worms?oldid=1445"
Community content is available under CC-BY-SA unless otherwise noted.