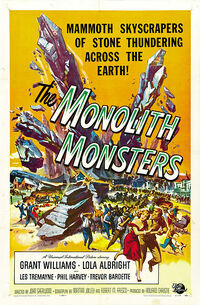 When a meteorite crashes to Earth, fragments of it spread into a small town where they grow into immense towers when wet and turn humans they touch into rock statues.

The Monolith Monsters are large fractured towers of black rock.

The Monolith Monsters possess the following powers and abilities:

The Monolith Monsters are destroyed when they are toppled into saltwater, the salt dissolving them.

Add a photo to this gallery
Retrieved from "https://movie-monster.fandom.com/wiki/Monolith_Monsters?oldid=973"
Community content is available under CC-BY-SA unless otherwise noted.