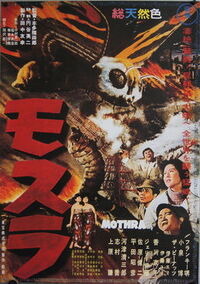 Mothra is the main character of the 1961 Japanese kaiju film Mothra.

The goddess of a tribe on Infant Island, Mothra is a benevolent deity who is heralded by the Shobijin, miniature women who serve as her priestesses.

Mothra is an enormous white moth with black areas on her underbelly and face and orange markings on her sides and face. Her wings are orange and yellow with white stripes and black swirling patterns. Her six legs end in yellow clawed feet, her antennae are white, and her eyes are large and bright blue.

After the Shobijin are returned to her, Mothra returns to Infant Island in peace. 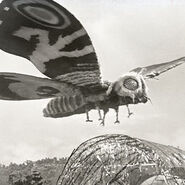 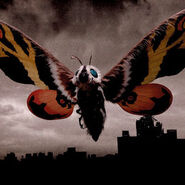 2001
Add a photo to this gallery
Retrieved from "https://movie-monster.fandom.com/wiki/Mothra?oldid=2838"
Community content is available under CC-BY-SA unless otherwise noted.