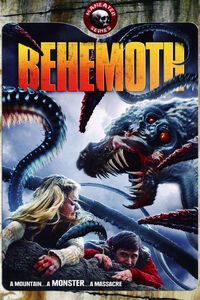 The Mountain Behemoth is the main antagonist of the 2011 American horror film Behemoth.

The Mountain Behemoth has laid dormant for hundreds of millions of years before awakening and causing massive earthquakes as it slowly emerges from the mountain in which it has been sleeping.

The Mountain Behemoth is a massive, vaguely crustacean beast with gray skin, a dinosaur-like head with small eyes. This head is on the end of a long segmented neck that connects to its body, from which sprouts four arthropod-like legs and nearly ten thin whip-like tentacles.

The Mountain Behemoth possesses the following powers and abilities:

The creature is killed after it is blown up via a rocket launcher.

Add a photo to this gallery
Retrieved from "https://movie-monster.fandom.com/wiki/Mountain_Behemoth?oldid=527"
Community content is available under CC-BY-SA unless otherwise noted.